While I wait for what I fear will be a massive bill and several envelopes full of Post And Gos of all sorts I thought I should update you with the latest expense - the Buckingham Palace prestige book with its tradional Machin pane. You do have to wonder what will happen to the World should a prestige booklet not be issued with a pane of eight Machin definitives (or some with a few Regional pictorials thrown in) and a strange label in the middle serving no useful purpose at all.

There are several pages of fine-looking pictorials with different stages of the Palace's development over the centuries and some internal views too. It's all quite interesting and well produced. Here's the pane that matters, though; the sole reason I buy these things. 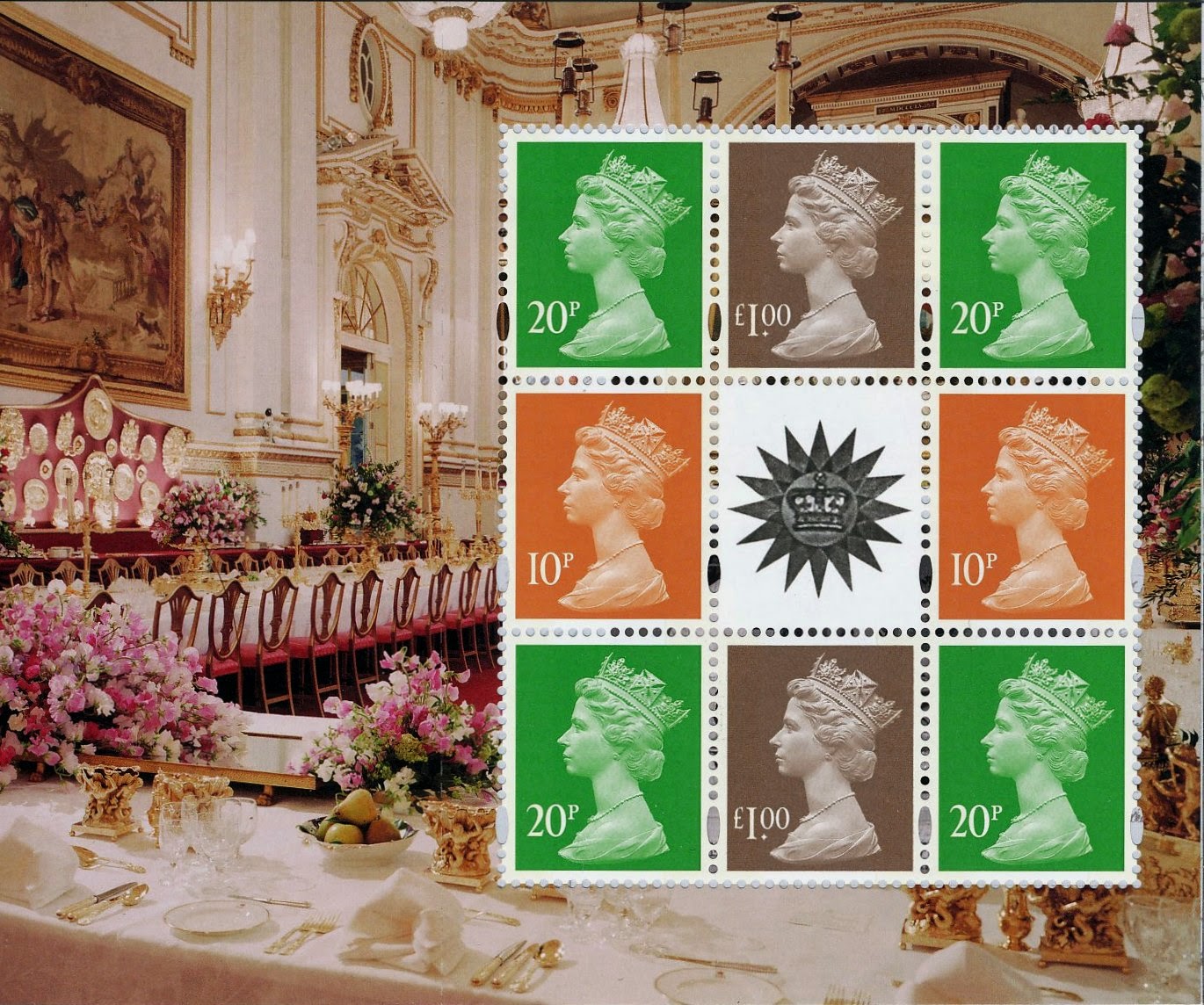 Three new stamps here, obviously. Each of the 10p, 20p and £1 definitives has M14L MPIL code and they are gummed and printed by Enschedé.

There is also a booklet of two pictorials with four 1st Class definitives. these are the first appearance of M14L MCIL and come from Walsall.

Posted by Andrew Hill at 4:04 pm No comments:

The good people at Norvic have been busy and today the two new denominations for a number of different issues arrived. The Robin pair have code MA13, the others undated. I have a feeling there are plenty more still to come. I am also dreading the arrival of pictorial rolls in Post Offices with the new NCR machines. Royal Mail will be getting more revenue from us collectors than people actually wanting to send letters.

These have a curious mixture of fonts! 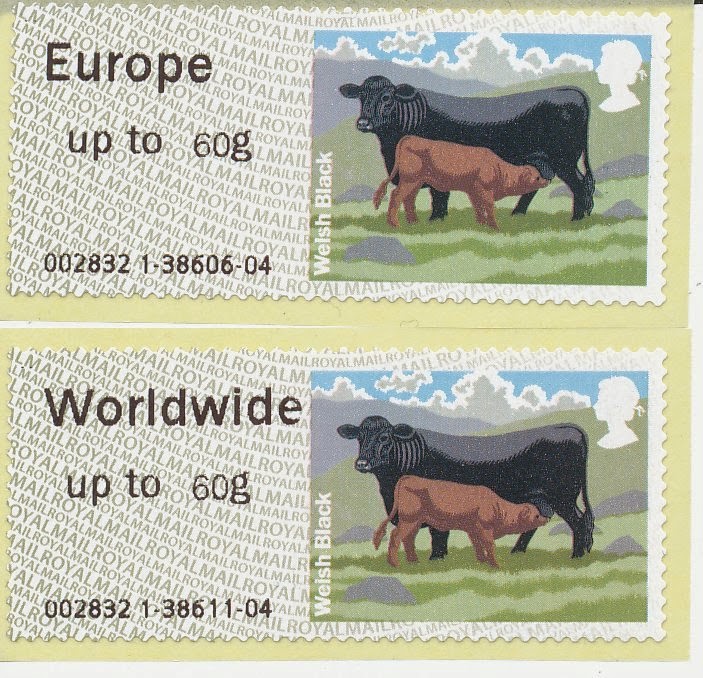 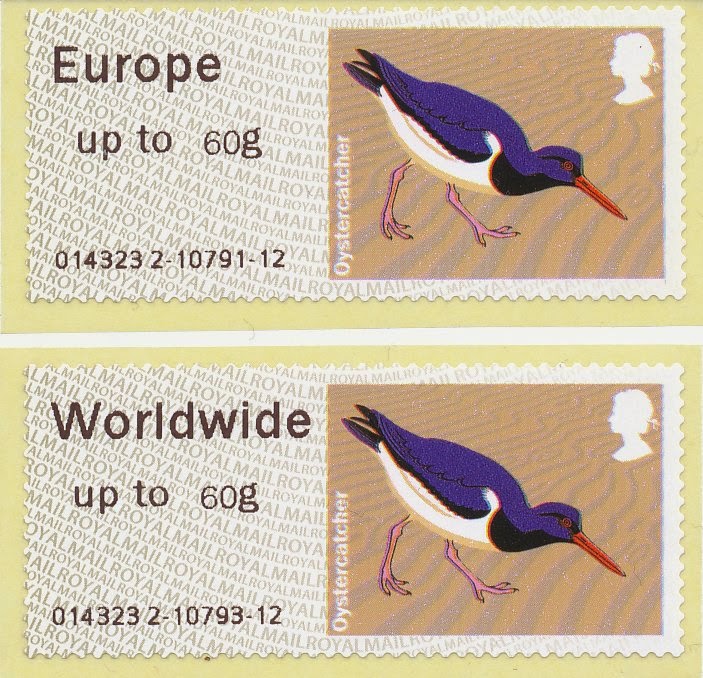 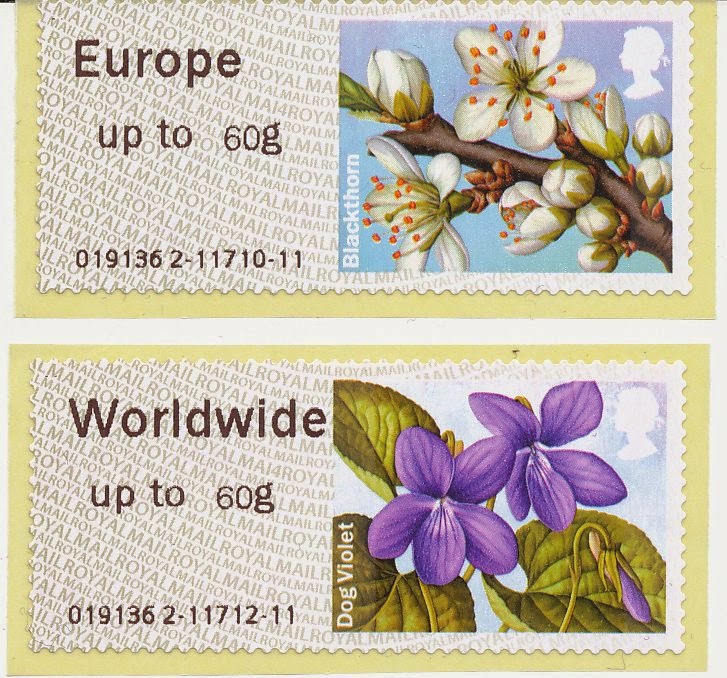 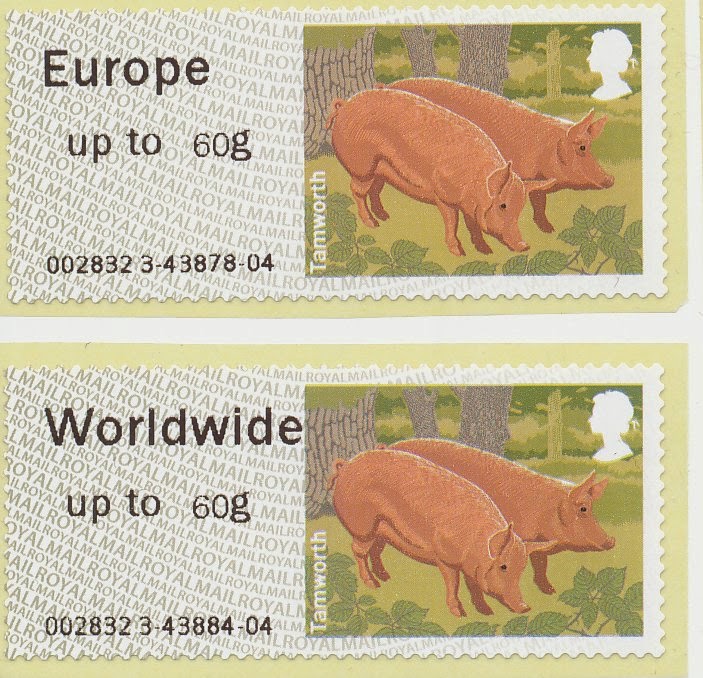 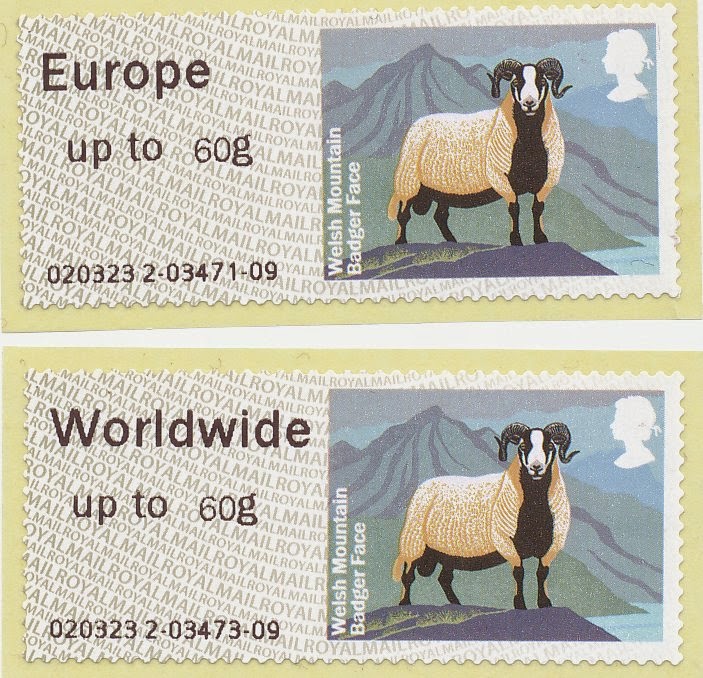 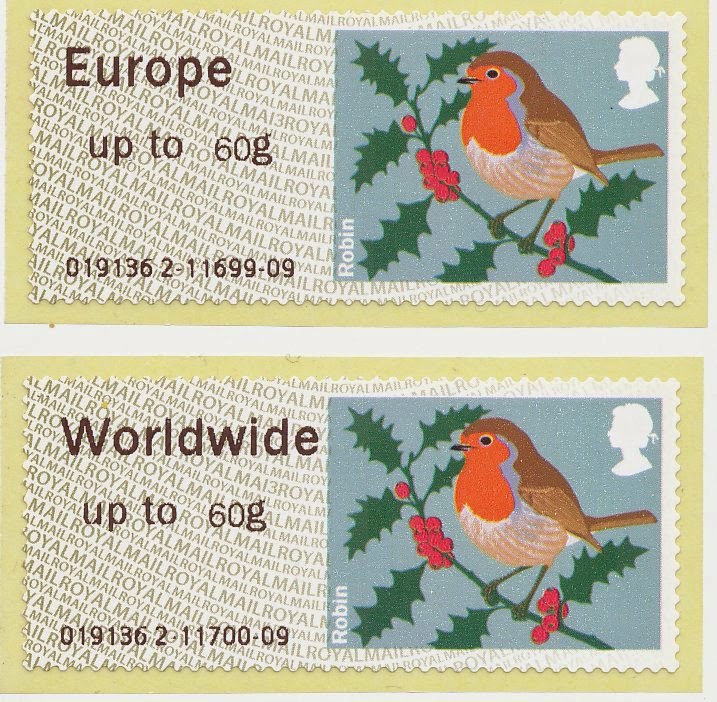 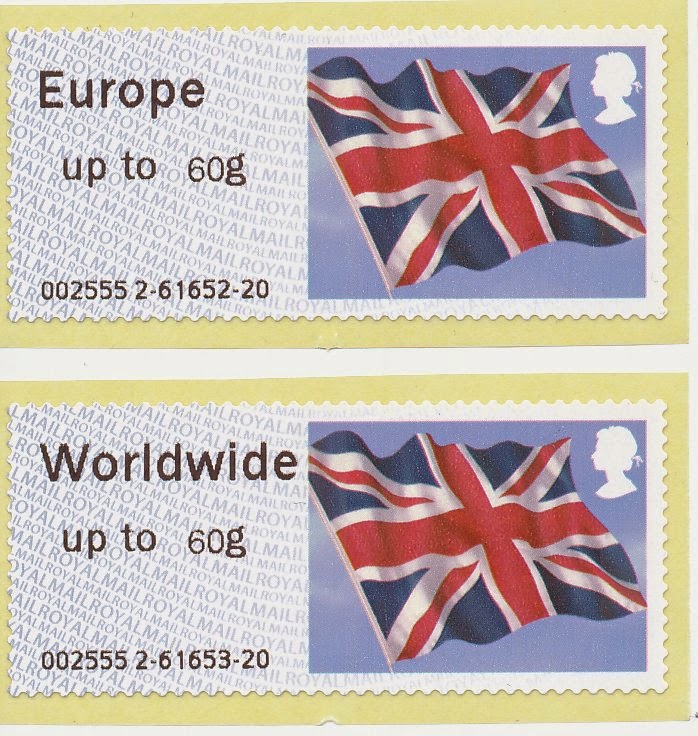 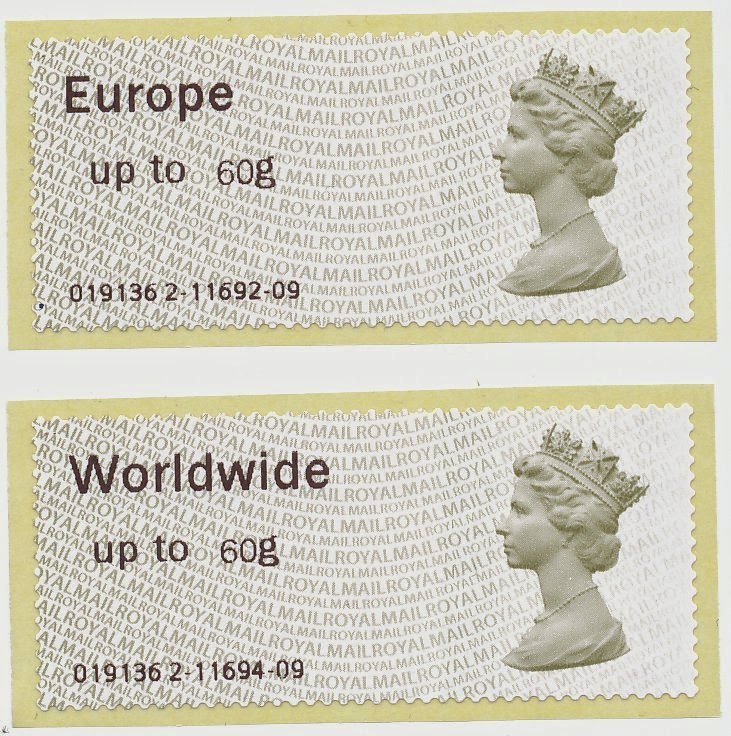 Posted by Andrew Hill at 2:12 pm No comments:

Sometimes I don't quite know why I do things but I wondered just how many different denominations might appear at current rates on the new NCR Post And Go Labels. I guess these may also be what you'd find on Horixon labels too. I haven't covered huge great packages or International Tracked or all sorts of Special Delivery before, during and after breakfast services. The list below, though, should cover all the prices up to about £5. It may be of interest to someone.

If anyone cares to let me have the previous rates then I can add them to this table and that would then be a pretty complete list. Having said that, I don't yet know whether the NCR labels can, indeed, be used for all these services. It may be that some aren't possible. That would be nice to know and I could then cut the list down a bit.

One thing's for sure. I have now decided that I shall not be setting out to collect mint examples of each one!

Posted by Andrew Hill at 1:33 pm No comments:

I shall just have to start writing to myself 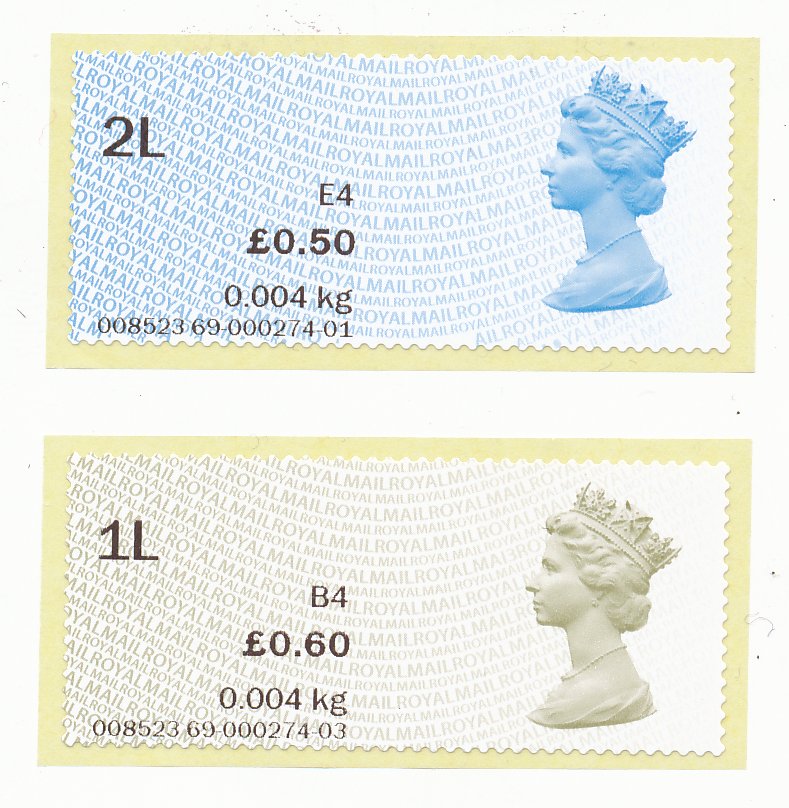 These are a couple of items from the new NCR range that I have obtained. The others I have are 2LG (69p), 1LG (90p), A Letter (under 10g 88p) A Letter (between 10g and20g £1.28) and A Letter (over 20g £1.88) which may or may not be complete as I am getting confused. Yes, Europe up to 20g seems to be missing. (If anyone can help with that, at the old rate, do let me know). These are all at the old rates so I suppose I now have to get another set at the new rates. That set will also be different in that some weight points were merged.

What I don't know, and hope someone will advise, is whether there will be also versions of these with other denominations - as for the Horizon labels which could result in a huge range of possible different prices being shown. At that point I wouldn't try and get any more than a basic range and anything else that appears in the post of bundles I get from time to time is nice but not essential.

Collecting British stamps has never been simple but now I feel we are going through a distinctly odd period when I think several variations of these labels will appear before finally. in time, a standard is settled upon. Some of these may well prove to be extremely short-lived and, not being available or even promoted by many people at all, will for many be items you'll kick yourself for having missed as prices for one or two of them soar.

I really can't imagine that there will many old rate examples used on mail at all. They're the things to look out for. Even current rates of normal Post And Go issues, never mind these, are scarce unless you happen to have a lot of customers living near towns with machines. Actually, now I think about it, I'm lucky to get any stamp nowadays!

Oh boy. Look at what is now being issued.

It seems that there are some new NCR machines have been installed - the first was actually in Harpenden, Hertfordshire, not far away from me at all! This is what they are producing after rather a lot of screen touches, I am reliably informed. The stamps have what is termed Open Value so are similar to the gold Horizon labels and have a letter to specify the service and the post cost is displayed.

Example showing the old rates will be in short supply so I would recommend getting those wherever you can from a decent dealer. The machines have only been operational in a few places since the beginning of March so the old rates were applicable for just a few weeks at most.

From here, you need to consider just what to collect. My first thoughts on these would be that I will need one from each type of service. Maybe I should rephrase that; I would like one from each type (as I have no idea how many there will be or how easy some would be to obtain). A standing order would, I presume, be one of the standard rate items for each 'issue'. Some will want them on each design within an issue too. Not me.

I still have a lot to learn about these. For instance, I have seen examples where the destination post code is printed on the label. I guess this is a choice at a screen where you can either print to use there and then or perhaps use on whatever you like later, like a NVI but, of course, with value indicated. Like a stamp, really.

Over 60g. Over 60 new items you'll need in your Post And Go collection! Oh dear.

Europe up to 60g and Worldwide up to 60g rates were included in the postal rate changes announced recently so that means there'll be some new labels! Quite a few, in fact. Oh dear.

The good people at Norphil.co.uk think they may be supplying them on each of the following:

The MA13 Robins, MA13 Flags, MA13 and undated Machins are pretty much the normal ones too.

I hesitate to add them up but those who like to get every combination possible have one hell of task (and bill) ahead of them. Two new denominations for each of the six pictorials. That's twelve for each of the four series they reckon they'll be found on. Forty eight. Add two each for Flags, Flags MA13, Robins, Machin and Machin MA13 is another ten. Fifty eight so far.

And who knows what else will emerge by way of even older rolls, fonts, overprints. Oh Heavens, I forgot the overprints!

Here are some more Post And Gos to look out for. The Flag is now in the new font 4, and also has the BPMA overprint, both appearing on MA13 backgrounds.

I have also been fortunate to get hold of the wonderful 1st Class Large error (on undated background) on a Stampex 2014 strip. This is well worth looking for! Of course, on a pictorial that would have been obvious but on the wide space available on the Machin head type it looks OK at first glance.

There is also a BPMA strip on MA13. These dates in the background will make collecting expensive as there seem to be two versions of each type at the moment - one on undated background and another on a background with a year code. So how long will it be before we get MA14 too for some issues and there is always the possibility of old rolls in future being put in so MA13 or MA14 might well appear unexpectedly any time!