Merry Christmas. A time for feasting and putting things away.

I was thinking, as I set this month's new additions out, how I used to put everything into either an album or a stock book as soon as it arrived. Now I have a quite unbelievable pile of envelopes and black card with stamps beneath clear acetate strips, most just about staying upright but quite a few starting to fall over or, in some worrying cases, out.

I gave up trying to keep the definitives in an album purely because I had found myself having to redo the pages every few months when new values came out. To be fair, that is nothing like the problem it was but the NVIs would be a complete nightmare now, with several hundred 1st and similar quantity of 2nd with the smallest of differences which I may not actually be able to spot myself. I just hope I can still match the various cards to the details sent with them at the time!

It is several years now since I put anything away properly - possibly six or seven - so there is quite a big job that I must do before it all gets completely out of hand!

Something odd did hit me recently, though. I collect Corgi Toys from the 1956-74 era and, as with stamps, have this desire to get a 'complete' collection; you know, one of each model and also the colour variations too. I take photographs of the new acquisitions and display them on my web site and then advertise them for sale. Well, most of them, that is. Some I really can't see me parting with but most I can happily pack up and send to collectors all over the world. The thing is - I have seen and owned each one and have the 'collection' in photographic or digital form and I am quite happy with that (with, as I said, one or two exceptions). I didn't expect that to happen. I thought I would want to keep every one or, at least, only sell those in poor condition with a view to buying a better one some day.

What changed my attitude, I think, has been the problem of displaying them all satisfactorily. I really do have a huge number, having almost succeeded in getting an example of every one! (There are gaps - some are several hundred pounds and extremely hard to find.) So they have been stored in a box for a year or so and I am getting far more satisfaction from being able to display them digitally on my site and in various articles I write than the large brown cardboard box on the floor could provide. I have since moved them to drawers in an old 1940s tallboy but that's not going to make much difference.

It could be similar now with the more recent stamp collection. Even if I manage to get everything into albums they will be in a box somewhere and not a great deal more accessible than the stamps are now. I am beginning to wonder whether I could even go down the digital route with these? Just store images of all the variants. as I have never been a big fan of the 'need more than a magnifying glass to see' variations, this could almost work for me. I say almost because I would feel I was somehow letting myself down after all these years. The series will end before long and I have such a good collection so far that it would be a shame not to see it through to the end now.

Because part of the joy of collecting is to be able to look through what you have, compare items and be pleased at some of the values, I may well scan each page one day (well, one year as there are a lot already!) and that will enable me to browse nice and easily. But I will still keep the albums, and maybe try and find a nice shelf for them.

So, what's new this month? Not a great deal, to be honest. One interesting Post And Go Machin. The card from the Bureau and a M14L code for the Special Delivery 500g. Boy am I glad I stopped the pictorials and overprints (or whatever term we're going to use as I know, technically, they are not an overprint). I narrowly missed what would have been an absolutely massive bill for:

I could get a really nice and rare Corgi Mini, #249 in rose-red with the Pop Art stickers for that. 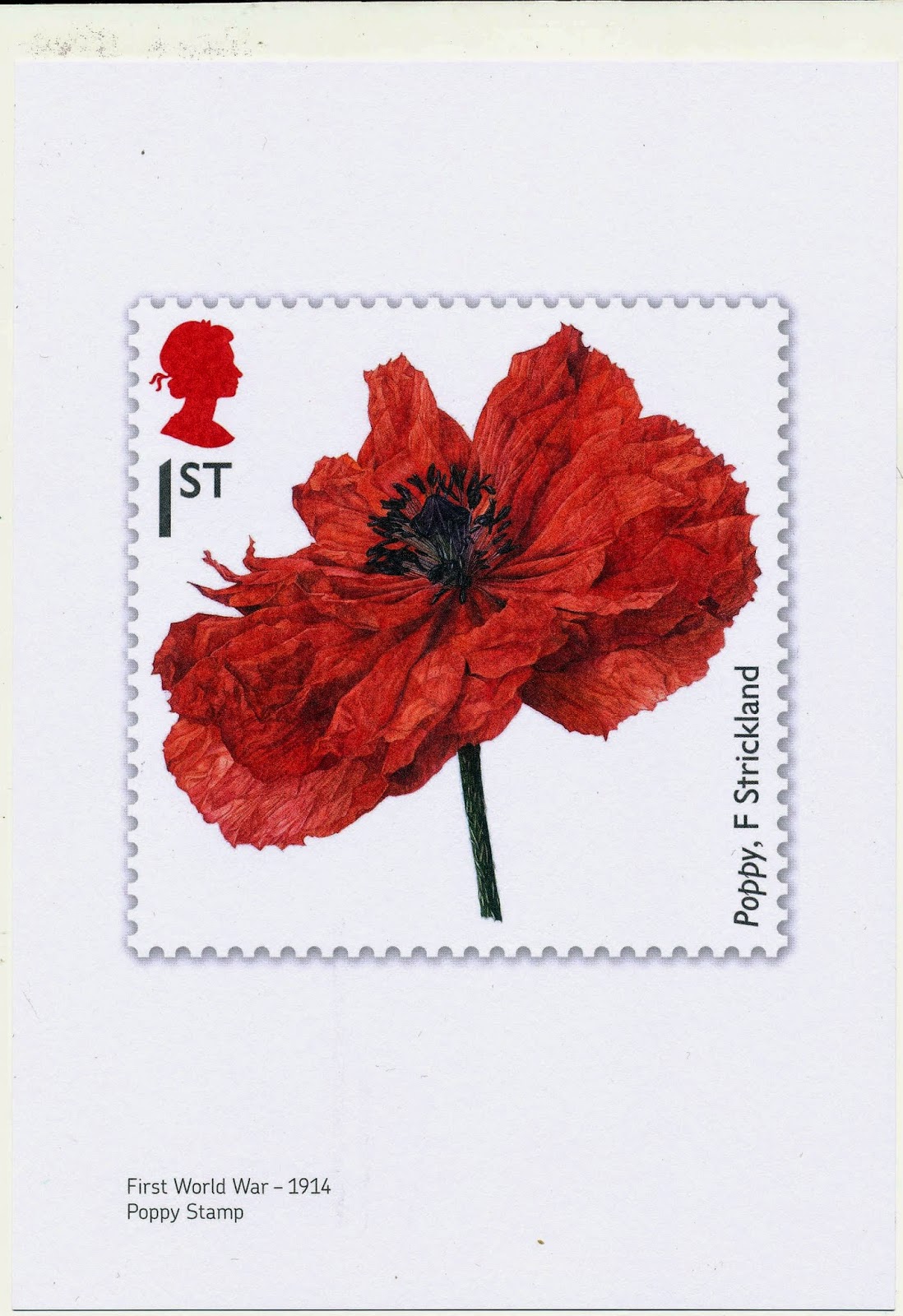 Thank you to The Philatelic Bureau for this nice A5 card, their Christmas gift to some of us customers. 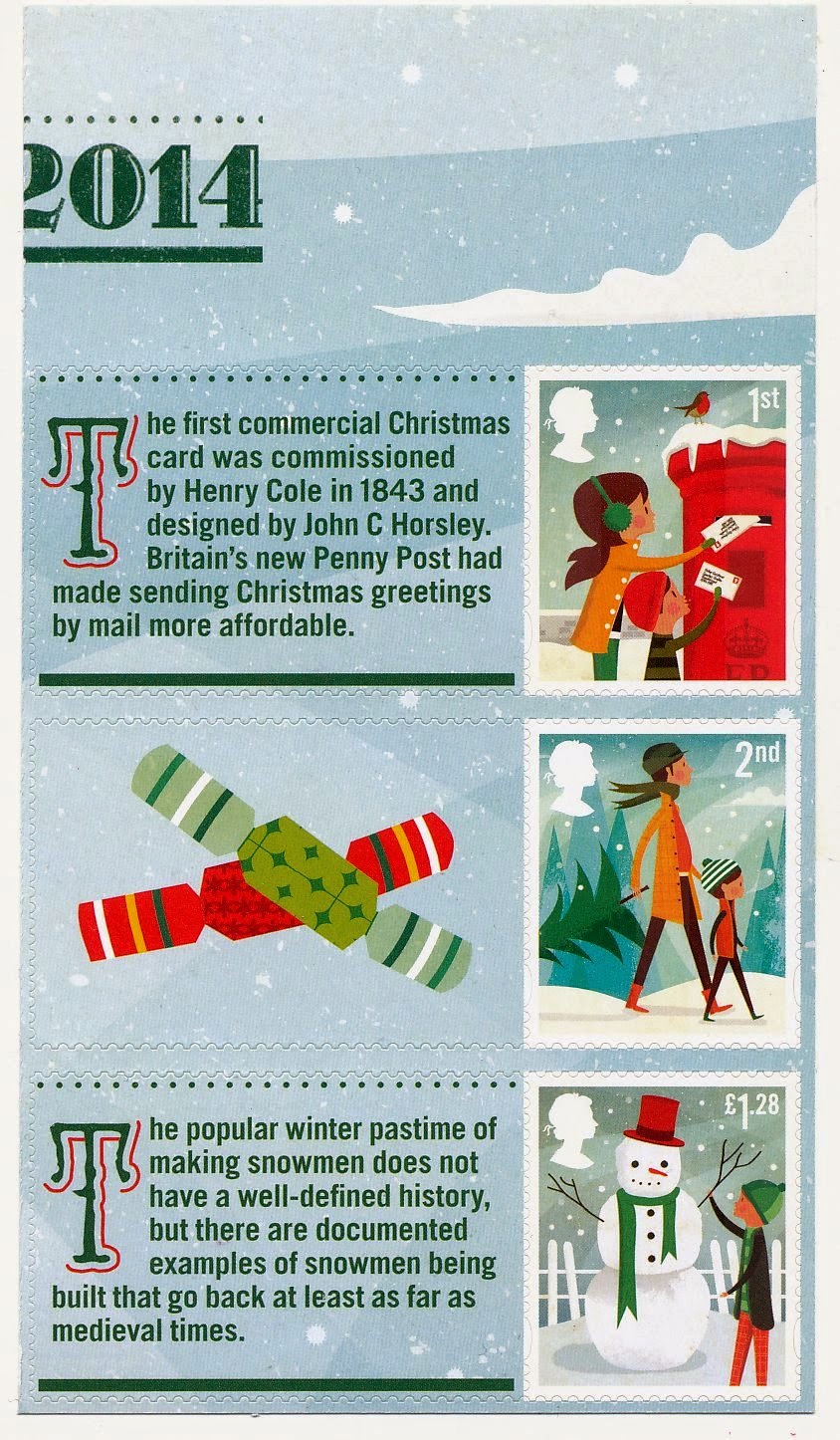 With Cartor producing the Smilers Christmas sheets, there will be another version of each of the Chritsmas 1st, 2nd, £1.28 and £1.47 stamps to collect. 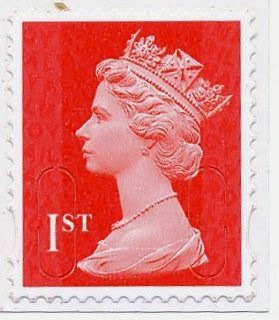 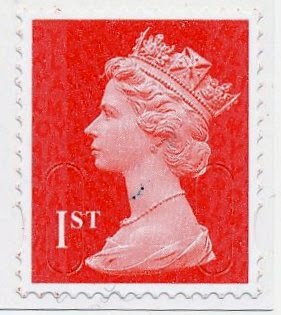 Now it won't be obvious but it seems there are some pretty wide variations in the fluor on M13L MSIL 1st class stamps - running from very dull to extremely bright. And because it really isn't that obvious I think I may well be getting rid of these fairly soon. I just can't get too excited. Maybe if I but an ultra violet lamp I might. (The mark on the neck is not on the stamp but must have been on the scanner surface.)

I also have a book of six of the extremely bright fluor ones. That'll definitely be put up for sale! 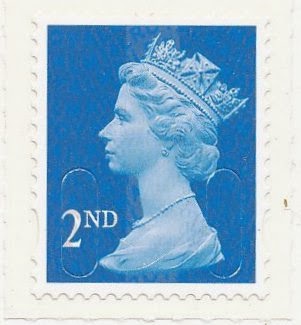 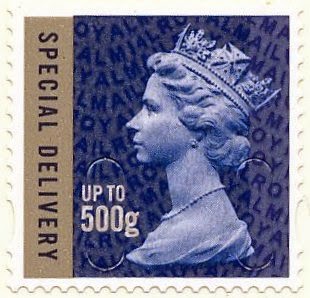 Quite a pale version of the 2nd Class DLR M14l MAIL issue from September and the 500g Special Delivery stamp has now sold enough to need a reprint with a M14L code. This is an expensive item. I've still yet to see one in actual use.

Posted by Andrew Hill at 4:59 pm No comments: