No, the booklet isn't wrongly cut, just my scan not being up to normal standards! This is, though, quite an expensive little book as it features four 1st red with dull fluor and the iridescent coating is short at the top. The stamps are the Walsall M14L MCIL which have appeared before. I don't need this in my collection so will be selling it if anyone is interested.

These two strips of Machin Post And Gos look pretty similar. Indeed they look pretty similar to another strip with that feint IIA font released last year. So what's the difference. First, the strip originally released had short phosphor bands - quite common on these things it seems. One of the above has what I'd call 'normal' or properly synchronised bands.

The other also has the same short phosphor bands at the bottom as before but also have what is described as sometihng akin to AOP, a sort of phosphor wash, presumably where the equipment has allowed the additive to spread during production, and, as well as being clear under a UV lamp it has also affected the printing which is very weak in the affected area which starts about a third of the way across from the left. That strip is the left one shown above and the poor printing is quite obvious.

Both strips are undated. 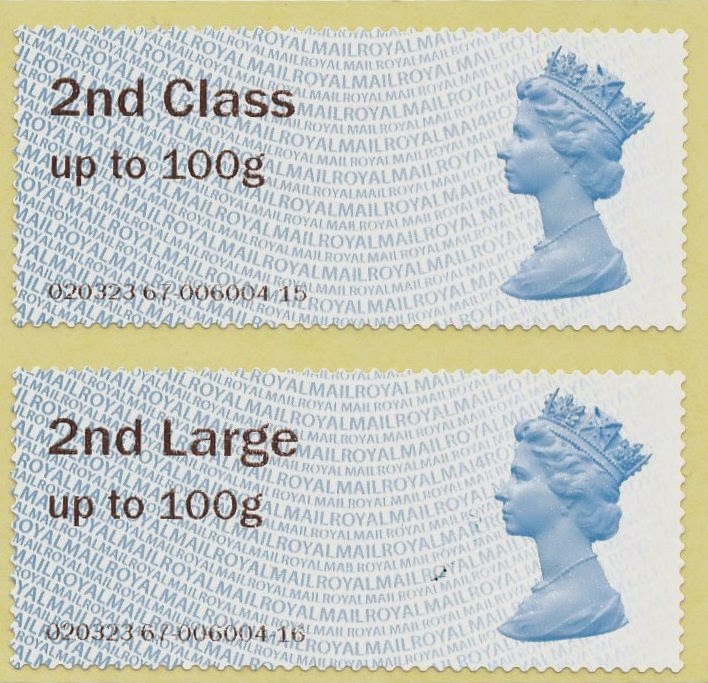 Lastly in this less than enthralling group that arrived this morning, there is the 2nd Class Machin Post And Gos with 'normal' phosphor bands. the previous ones were interrupted at the bottom so looked a bit odd. These are MA14 dated as before.

Again, none of these variations particularly interest me so I will probably keep the 'normal' ones and sell the off beat stuff.

How I miss the days when there would be all sorts of interesting Machin definitives appearing each few weeks.