Stamps you'll see on envelopes and labels you can buy in museums. 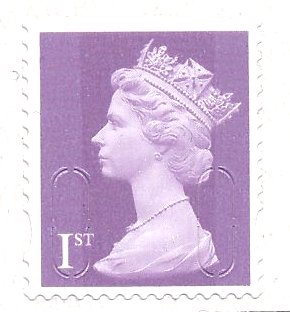 The 1st amethyst in a slightly deeper shade from HM The Queen's 90th Birthday Concrete and Clay booklet by Walsall. Apparently, it also has much brighter fluor. I must buy a lamp one day as I am clearly missing out on all the additional differences there. It would also have helped me considerably in the 1980s. Remember All Over Phosphor, Phosphor Coated Paper, PCP2 and variations on these themes? I tried to distinguish by holding stamps at various angles to see which were shiniest, not to much avail. That's when I finished up subscribing to a dealer's standing order and just trusted whatever he sent, carefully writing AOP or PCP1, 2 (or even 3 I believe) below the Hawid mount on the page!

The 1st amethyst also has the security backing paper by the way. 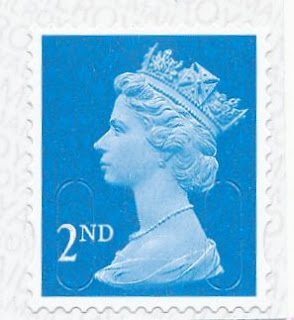 A 2nd blue from the books of 12 by Walsall with the M16L MTIL code that is new to the lists. This also has security backing paper. 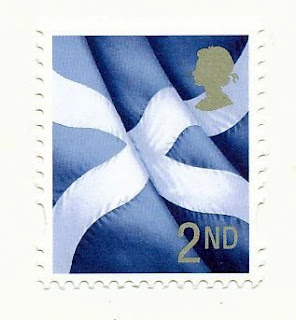 A new printing of the Scottish 2nd Centre Band Saltire by Cartor now has a grey Queens's head instead of silver. 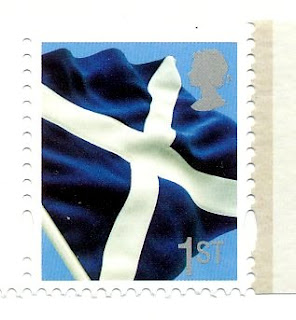 From the Great War: 1916 booklet pane come the four National stamps that are similar to those in the Football Heroes booklet from 2013. These have what are termed vignetted phosphor bands instead of the solid type of 2013. These all have a duller fluor than the earlier issue. All from Cartor. 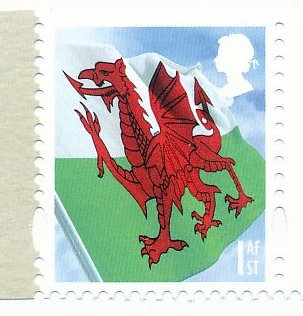 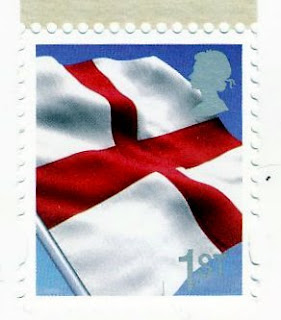 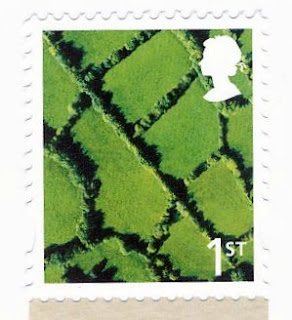 Post And Go collectors will have had another expensive month or two with four strips from the World Stamp Show in New York and a mere nine Battle Of Jutland overprints. I am so glad that I gave up on these. As a collection I am not even that sure they look particularly attractive. One possibility might be to have just one label for each issue, type or change instead of the standard strip of six or whatever is dished out by the machines. The idea of getting each value with a different image is bad enough when that leads to thirty six labels having to be purchased but should the system progress to having a wider range of denominations added then life will become impossible and all but the very rich will have to have something other than everything.

I get lots of parcels each week in connection with my Corgi Toy catalogue project and occasionally these feature the new NCR type label with an amount and service printed on an olive or blue Machin background. These I do find interesting but, strangely, are not regarded as worthy of our consideration by many, if any, of those who might supply us with regular issues. In my view these are far more like 'stamps' than these endless streams of labels issued almost entirely for sale to collectors and exhibition or military museum visitors.

Unless you are an avid collector of military memorabilia or have a specialist collection on the theme of Exhibition or Museum Issues I am pleading with you more general Machin collectors simply to say 'Enough is enough' and cancel those standing orders for strips of six of this or strips of six of that henceforth. Draw a line in the album. By all means get one example from each new issue that you believe has come from a machine with some reasonably likely postal purpose but the cessation of guaranteed demand for the overprints, in particular, might dissuade the Powers That Be from continuing with them other than for very limited interests of a non-philatelic nature. Maybe you can start collecting the NCR types instead and, who knows, they might even prove rather more representative of Britain's stamp future in the collections we pass on to our grandchildren.