I prefer collecting items not intended to be collected 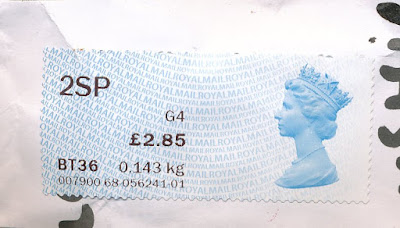 Now here's something I can collect. Indeed, I think we should make a real effort to get these properly accepted as 'stamps' and someone might make a catalogue of the various types available in due course.

I am talking about labels like this that actually get used on post. Not a lot, admittedly, but in my experience, a lot more than the Post And Gos that we are sold invariably in strips of six and with either a pretty picture or some text marking some event or worthy place and which will probably only appear on an envelope if a customer has ordered used copies.

I would also suggest that it is a used collection that we should aim for. I guess it would be comparatively simple to find someone to print out some mint examples and, whilst that's OK, it would be the postally used examples that would be the most difficult to build up and which, potentially, could be the more interesting and valuable in years to come when another generation takes a fresh look at all this.

What I am pretty certain about is that the mint Post And Go issues of the other type, even those with just a few days' Exhibition or similar life, will seldom be particularly sought after in years to come. In so far as they can be used in place of normal stamps in future, the Post And Gos will have a value but I suspect it will be often be rather lower than the equivalent face value which doesn't make them the best of investments either. Obviously there is a good chance that postal rate rises will outstrip inflation and rates available from banks and building societies in the foreseeable future but you would be better holding sheets of much easier to sell and use first or second class stamps than all the strange Europe and Worldwide rates you've been filling stock books with to date.

It is not really about its potential value but more about promoting a simple, good old-fashioned collection that I like this idea. My collection of these items is a pathetic dozen or so but it is far more appealing than all the pristine strips I had accumulated.

It needn't be a Machin thing either as here are some mint items from the Spring Flowers issue: