What on Earth is going on these days at the Ministry of We Decide What Goes On Stamps? After a mass of Star Wars promotion we now get a Game of Thrones promotion with almost every philatelic item being thrown into the mix. A little old lady was quite perplexed when Counter staff gave her a book of 1st Class stamps recently that bore a completely different image to one of the Queen as she had expected. Now she will have to figure out what something that looks like a wheatsheaf is doing on there.

Remarkable as the HBO Series may be, is this really a suitable topic for a British stamp issue? I suppose we have had several authors depicted, some even having their own series, and Pink Floyd, David Bowie and several others have been there, representing today's music industry so the devotion of an issue and many extras to another successful piece of art has to be seen as being consistent in some respects.

My feeling is, however, that issues that depict such recent, indeed current in this instance, work are more promotional material, for which one presumes Royal Mail receive hefty chunks of money which defrays the cost of production and, when taken with what one assumes will be good sales across the world to fans of the product, the coffers remain adequate for the provision of tedious stuff like delivering letters to us here in Britain.

I ceased collecting what used to be called Commemorative issues way back in the 1980s when the frequency and size of issues seemed to increase and I began to think that some issues were being released purely for collectors to collect. Even in those days you would see few used on envelopes or parcels and the 'prestige' books remain unopened (and largely unread) to this day.

Anyway, there's a book of six 1st Class Game of Thrones stamps which, of course, is nothing to do with Machins but it serves as an introduction to the few new ones that we will feel obliged to acquire from the prestige book. 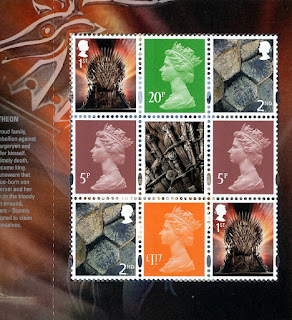 In there you will find a 5p Ash Pink, 20p green and £1.17 orange with M17L MPIL codes. I do wonder somewhat whether, if I were to start collecting now then I would ignore the prestige booklet Machins. I would have to have one or two of the early ones which people did, actually, buy and use but that is all. The others will forever only be seen in panes like this one or in parts cut out for individual items for supply by dealers. I believe one could, quite simply, delete all of them from collections and it wouldn't matter. If people wished to collect prestige books then that is perfectly fine by me but the Machins in them now leave me slightly cold and a touch annoyed that I have had to spend so much to get them.

You will also notice a 2nd Northern Ireland Regional in there, by the way. That is the first NI stamp from Cartor.

Now, to the real stamps.

The 2p now gets security printed backing, as does the 10p. Both are MAIL M17L codes by De La Rue. 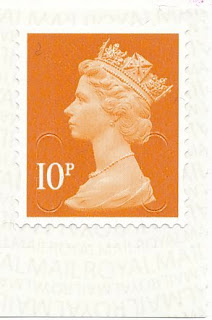 The security printing may not be at all clear in this illustration but it is there! 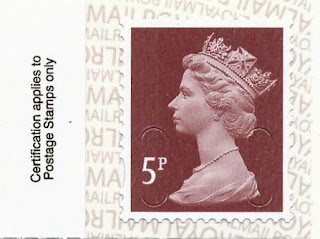 We also get a 5p Ash Pink 2 band in quite a darker shade of one of ash or pink than before.

So there are three genuine new Machins for your album, at least.