End of WWII, Queen and some definitives

I am rather late returning to this news blog and I shall just publish what I have found lying around and it may be necessary to explain later, add more or delete duplications. 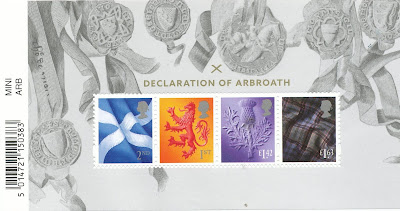 6 April saw the issue of this miniature sheet to celebrate the Declaration of Arbroath. Not Machins but I include the small definitives in my lists and these will all be new being inter alia on gummed paper as well as having [correction, I'd forgotten that these have not made it to self-adhesive world yet!] pretty much the same as sheet issues but with maybe small design differences I have yet to spot. There are sheets with and without a bar code.


£1.63, £1.68 and £2.42 definives with M20L codes have also appeared in my post box. I shall have to conduct an enquiry as to how these differ from the 17 March issues (if at all). I may have to remove these, just bear with me in the meantime as I am a little behind! [Update: these are March 2020 printings and seem to have a slightly deeper shade of Queen's head, although I suspect that there is a more significant difference between the results of my scanning these and the original issues.) 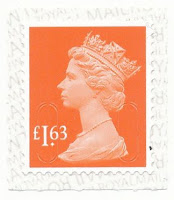 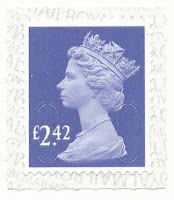 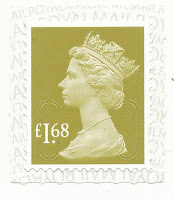 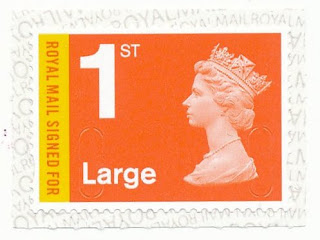 The 1st large Signed For now has an M20L code, first appearing around March - April. 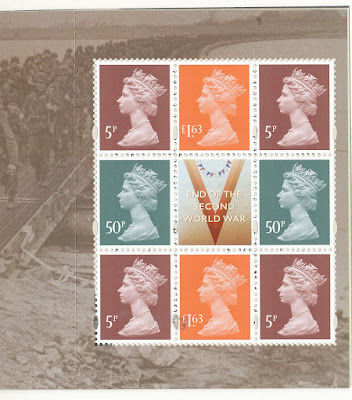 Two more Concrete & Clay books with 1st in quite distinctly different shades of red. Quite how each compares to the 'normal' shade I have yet to investigate but one will match and another won't, for sure. These are all M20L MCIL of course and not necessarily new unless the shade of one or the other is of interest. 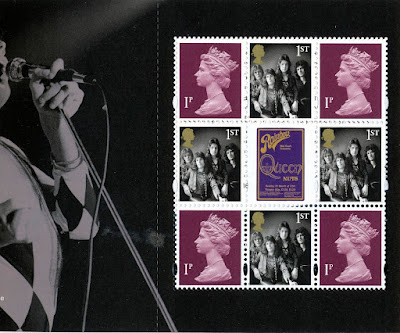 Another prestige book, issued 9 July, brings the band Queen to the attention of all those who collect prestige books. This will certainly make searches on Google more complicated than before. The definitive pane would be better referred to as the definitive size pane as it features the lowest ever combined value of Machins in all the history of prestige books. (I think that is true, although I am now wondering about the content of the Cookbook!) Expect a revision of this bit too in due course, with evidence.

What we have here are four 1p purples for no reason at all that I can think of, with four 1st class definitive size stamps with a photograph of the four band members as they were in the 1970s, all surrounding a strange label from one of the album covers.

I shall have to list all this stuff but I would really be quite happy not to see another prestige book. Whereas once I would have been writing to The Times and all and sundry to complain if a prestige book came out without a Machin pane, now I would welcome it. I would neither have to buy nor concern myself with what is a mere money-making item for Royal Mail and of practically no postal use. Yes, we can use the stamps but I have only admiration for those of you who collect just used stamps and who don't cheat by buying two books and sending the contents of one to yourself or good friends!

Not that that would stand that great a chance of a decent postmark anyway. These days it would be more likely to arrive either just as clean as it left you a few days before or with some heavy scrawl across it courtesy of your postman obeying one of many instructions to help prevent re-use of unmarked stamps.

Back in the 1970s my dear old friend Ugo Vincent could be seen making his way slowly from Abbots to Kings Langley in Hertfordshire where the good people behind the counter in Kings Langley Post Office would spend a great deal of time carefully placing round handstamps on the stack of envelopes he prepared for his stamp collecting friends. Yes, my used collection of late 1960s to late 1970s GB issues are very finely used indeed!