It's that time again; when I open the pack of this month's new issues, new printings, variations and whatever else can be classified as collectable or collectible and worry about how large the invoice is!

Ruddy football takes up a substantial part of this month's doings. It starts with a ridiculous sealed shiny pack which is supposed to remind us all of how some football cards came in cereal packs or something like that. I saw mine in cigarette packs and they weren't sealed which was far better because you could see what you had straightaway. If you wanted to. Now, how many collectors are just going to keep this sealed envelope in  a box somewhere? It won't go in an album so a box is its likely home. We won't look inside, because then it might not be worth as much. So no-one will actually know if there is anything inside of value at all! Royal Mail are struggling a bit at the moment so this could be an exceedingly jolly wheeze to make a tidy sum. 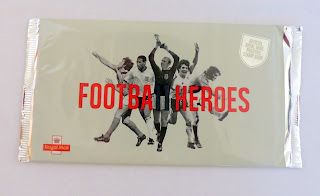 I now have two of these 9 May issue packs with whatever you think may be inside. So one is for sale - although you can buy them from Royal Mail for £11.11 until May 2014.

You really do want to know what's inside. Not just one but two panes of interest to definitive collectors. So you will have to buy two packs and open one up and hope it has got something inside. 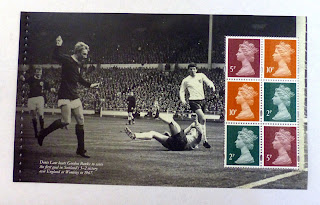 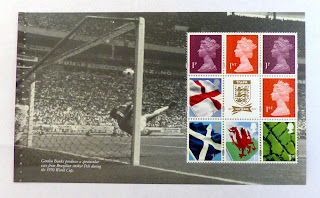 And some regionals too. It is interesting to see all three new style flags on display in place of the traditional definitives for England, Scotland and Wales. Northern Ireland still just have their fields.

This is the 4 definitives + 2 special issue style booklet, with two from the 11 illustrated footballers. Now I am worried that this means there could be another 5 booklets to feature the others. Hopefully not.

OK, safe to move on from football now to the continuing saga of De La Rue and the MA13 code in the security overprint. These were sown in my last post. Expect to see them again, though, as De La Rue continued with the MA13 idea instead of the M13L that Royal Mail want. So there'll be reprints and that's when M13L should appear - but if it's near the end of these values' lives it'll be scarce! 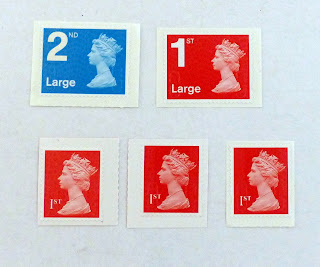 These five were expensive so I hope they prove a good investment. The 2nd Large Code B has an insert phosphor band at the right, short bands at the bottom and the iridescent overprint is inset right. Good grief. £17.50.

The 1st large has an the iridescent overprint inset left. £9.50.

Surely there can't be any more combinations of short this or that?!

Lastly, some fun with overprints on Post and Gos. 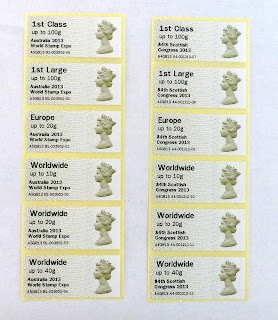 I didn't order these as I decided not to collect overprints. So I haven't been billed for them either! However, I may keep the Australia set as next month I should get another version that was printed in australia and has an AU code in place of GB. They'll be pretty rare, only being available at the exhibition and they also have the word World missing. I imagine people will want the pair of issues.

Then I'll probably sell them! So let me know if you're interested. And the 84th Congress can go too.

Posted by Andrew Hill at 8:29 pm No comments: