Some more 16 date codes for your lists

The larger Special Delivery denomination must have run out as there is a 16 code now. I've never seen one used yet but someone somewhere must be getting through them.


Something lese I have yet to see used is either of the Signed For stamps. I get lots of parcels every week that require signature and had expected to have seen a few by now but, without exception they have all had the Horizon labels.


The other items are three more additions to the 16 list.

There is a mass of items being produced as HM The Queen Elizabeth II celebrates her 90th birthday. The 'Long to reign over us' 1st amethyst appears again in two forms; from Walsall in the Concrete & Clay booklet with O16R REIGC code and from International Security Printers,(which I take as Cartor) in the Prestige booklet. In the latter case the stamps are gummed and have no security slits. The 1st amethysts have the code O16R REIGP which is easily read for a change! 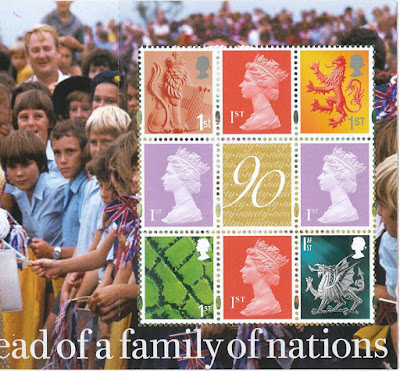 In addition the Prestige book features two 1st red stamps, code O16R MPIL and 1st regionals from each of England, Northern Ireland, Scotland and Wales. You do have to wonder how much longer Northern Ireland will have to put up with an aerial photograph of some fields when the other three nations get lions and dragons.

The label is a most disappointing 90 on a supposedly gold coloured background with the 'long to reign' text running across the background of the gold.

Now there is another version of the Prestige book. It would have cost you £60 if you're one of the 1,926 to whom is was issued. I expect all but a handful will have gone to dealers so will now be traded before long at even higher prices. For the extra £44.88, or whatever you finish up having to pay if you want one, you'll get a different cover and the pane of nine will have gold foil on the label. Phew, there's not actually any new stamp! Although, I daresay that the printing process for the special edition may result in distinguishable stamps in the pane. That remains to be seen but I shall not be rushing to get these. Nor, I hope, will the people who send me new issues and changes as that will be an expensive and unwanted package at the end of this month.

There will also be a second Concrete & Clay booklet with Prince William and young George grinning at us in June with what I reckon will be the same 1st amethysts.

The Bulletin says on p259 of the May issue that there will be a Limited Issue Retail Booklet (which doesn't sound quite right anyway) but I cannot see what they mean anywhere. Maybe someone knows and can advise and I will add a note here for you. My guess is that they are referring to the second retail booklet in June which won't be a limited edition, they were just confusing themselves with the Prestige booklet with does have a limited edition.

I am still waiting to discover what Royal Mail will be offering us in June for the 60th Machin Anniversary! Surely dealers must know. They are being very quiet. As, of course, they should be. Unless, that is, there is nothing to write home or here about.

Posted by Andrew Hill at 3:16 pm No comments:

Next we have two new stamps with 16 date codes and security printed backing paper.


Finally, just to confuse us, the £1.33 has been given a 16 code but no security backing paper. That is also how the £1.05 gooseberry has been issued.

Posted by Andrew Hill at 1:18 pm No comments: