I have to post this as it is the only reasonably accessible record of what comes in and to illustrate what I include in my catalogue. How long I can face much more of this, though, is unsure!


This has to be the most tedious post I have ever written! These items arrived today, being variations along the lines I had expected tp get plus a couple of oddities. One oddity is the old values in a strip using Type 4 font on Flags. That came from a Post Office in Jersey. I think they're getting their own Post And Gos. Good luck to them!

The other is a really amateur-looking Type 2 font with amended 60g values, also on Flags.

Otherwise these are just the BPMA and 85th Scottish Congress overprints on different backing with or without dates.

That's all I'm going to say.

Posted by Andrew Hill at 4:15 pm No comments:

We start with no less than three new BPMA Post and Gos. A 'Series A' issue with code MA13 in the old values from mid February. Then the updated 'Series B' with MA13 and then the same 'Series B' on Flag type labels. These last two were only available from 24 March 2014 so you can see how few will have been produced with the old set of values, making these two strips particularly scarce.

Next we have two 85th Scottiosh Congress issues - one on the plain Machin labels and the other on Flags. These are both 'Series B' and also were issued after the rate change so have the new sequence of values. Let's give Post and Gos a rest for a moment and deal with something much simpler. 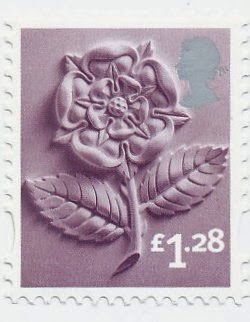 A Cartor printed England regional £1.28 has appeared with the vignetted style of phosphor. The 2012 printing just had very wide phosphor bands with the same density throughout. This has just sneaked out without anyone telling us so look out for it.

A strip of 'Series B' old values on undated Machin labels. 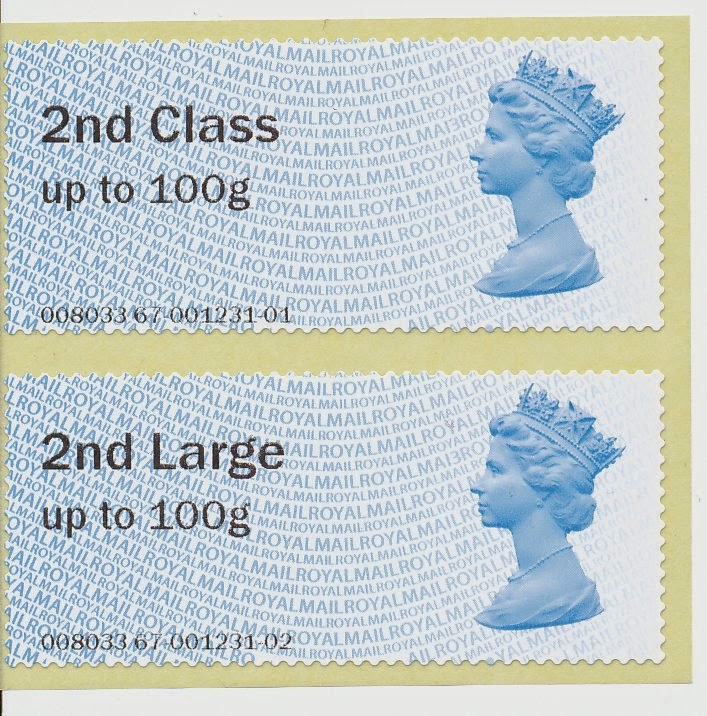 2nd Class Post and Gos now with MA13 codes - you really would think they'd be MA14 by now! Just shows how slowly some rolls are being used up. 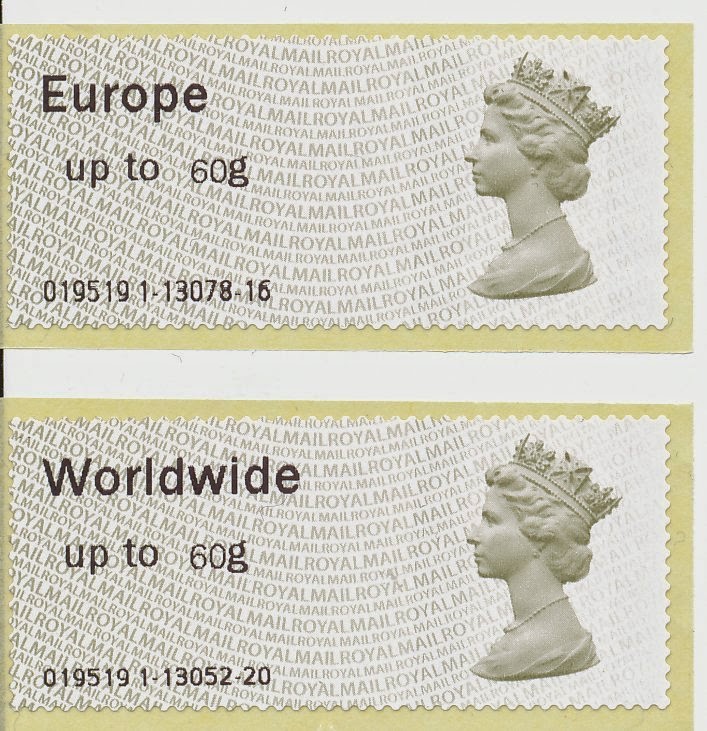 The new values produced on the old Wincor machines. On commentator remarked how poorly the 60g had been set up by the engineers, hinting that they might not have been too bothered knowing that in a week or so's time their contract was up and the new NCR type machines would be replacing theirs anyway.

This has been an expensive time and led me to wonder seriously if I should give up on the Post and Gos. I have had to reorder the overprints which I had abandoned briefly because they can be the sole source of some changes at times. If they were just an existing issue with an overprint then I am happy to let them go but where they appear first or even seem to be the only example of a particular type then I do need them.

It has been interesting to see how dealers are reacting to all this. One has very efficiently supplied as many pairs of the new values as they can whilst another is still looking as, theoretically, whatever roll can go in the machine could have the new values printed on it and no doubt some offices somewhere have an old roll or two lying around that will surprise us in years to come and mean that we can never be entirely sure which may or may not appear with the new values.

So far no-one has offered the NCR type of Open Values, other than someone on Ebay, where I got my 'set' of pre rate change values. B Alan Ltd appear to be thinking about supplying a few samples on each colour of background for those who order them. They are regarding them as similar to the old larger label that could also have a whole range of denominations. The difference, though, is that this label is distinctly stamp-like, specifically Post and Go-stamp like, same dimensions, perforations and so forth. So if you collect Post and Gos then I really do think you will kick yourself hard in years to come if you don't include as many denominations of the new ones as you can find or afford.

Just as the Post and Gos have changed in just a short while, so too will these Open Values - different alignment, font changes and, who knows, use on rolls of Flowers or whatever. Keeping my lists up to date, though, has been a nightmare with so many variations: Flag or Machin, date or no date code, font type 2 or 4, series A or B! Crazy. I am still on the verge of abandoning them but probably won't. As for the NCRs, I actually prefer them as 'stamps to collect' to the pictorial Post and Gos but whether I will be able to figure out any sensible way to determine what to collect has yet to be seen.