More M17L and that's about it. 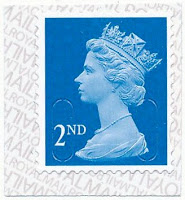 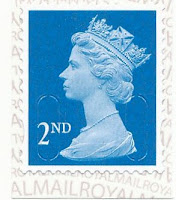 There hasn't been much to get excited about in August. Some more 17 codes have emerged, the MBIL and MTIL 2nd Class stamps and an MBIL 1st Class which I thought we'd had earlier but obviously not. 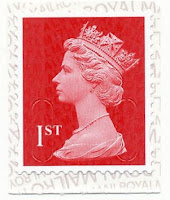 Royal Mail's Signed For service must be proving popular as there has been an M17L version of that now too. Although I use the service almost every day, Towcester and Greens Norton Post Offices just slap on the computer printed labels. I don't mind particularly as I cannot really ask clients to send me back the wrapping! 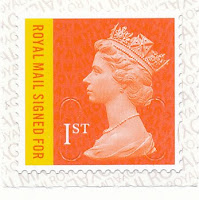 I believe that there have also been some changes in which way up, or which comes first, in the large and small text on the backing paper. As I have written about previously, this really does not interest me and it seems all too easy for anyone to create their own anyway. That effectively means that the only examples that will be recognised as different in years to come will be those that have other sections of the sheet or booklet attached. So if you think that one of these variations is going to be particularly valuable on account of its short life then you'll need to make sure it has sufficient extra bits to be identified as such.

Anyone searching for Machins in the recent issues of the British Philatelic Bulletin will have been very disappointed. July's Bulletin had no Machin stamps at all and August had just a couple on covers that were not the topic of an article anyway.

Posted by Andrew Hill at 5:29 pm No comments:

5p yellow-olive. Or am I seeing things? 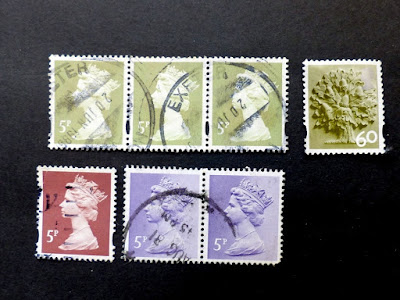 Just spotted these in a stockbook someone sent me. 5p yellow-olive? I don't remember that. In fact I have no record of it in my lists either. Two phosphor bands. Similar print to the 5p lake shown  and colour very similar to the 6p. Have I missed something? Am I going slightly mad?

No obvious signs elsewhere on the strip of discoloration by acid or something, although that has to be my first thought as to what has produced these. A print of the 5p in the 6p colour would be extraordinary.