Here are the Pond Life 1 stamps that you're more likely to encounter than the Royal Mail Presentation Pack variety.

£154 for two complete sets of each machine type is really a bit much, though. Not that I'm blaming anyone except myself - I really don't need to have every design in every denomination. So I shall reduce my order for whatever comes next to a more modest six designs featuring each different value. I really don't care which is 1st and which is 1st Large. Those sets would have cost me a more manageable £31.50. So that's a surplus 10 sets for my future shop! By the time I actually get round to selling anything the prices might have gone up which might make it all worthwhile after all.

Dr Who and a few more Machin discoveries 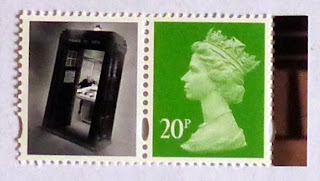 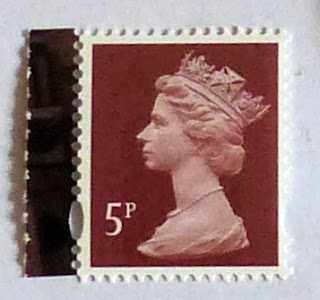 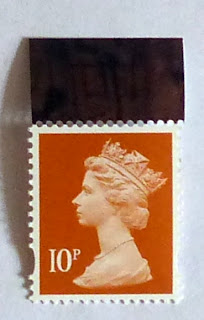 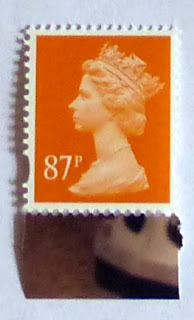 So here are the four Walsall litho printed (despite what Royal Mail say about gravure, according to B Alan) Machins from the Dr Who prestige book. As I said in my last post, the 87p value does seem unfortunate but then the chances of anyone ever getting a genuinely used one of these was pretty remote anyway!

The 1st Tardis has made a number of appearances: as part of the prestige book pane of Machins, where it appears gummed, in the prestige book version of the miniature sheet with four aliens, in the miniature sheet issued separately , in a booklet of 4 with two featuring Doctors and in a Smiler sheet attached to labels of various aliens over the years. All these others are self-adhesive. The Smiler sheet version is illustrated above, although I am sure all will be slightly different. 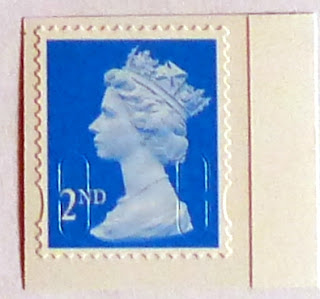 The MA13 codes are appearing now and have been seen on 2nd Class Walsall from Books of 12 so bearing a T code too. There have also been the new 1st red with a 13 code - more about them when I get them.

It will be interesting to see how scarce some codes will be. I suppose a value printed or reprinted just before a rate change would be a candidate as there will just be the single run of that one. Stocks running low near the end of a year in which a not particularly popular stamp hasn't been reprinted (e.g a MA11 code still in use at the end of 2012 and  having to be reprinted in December 2012) and a small run is made. 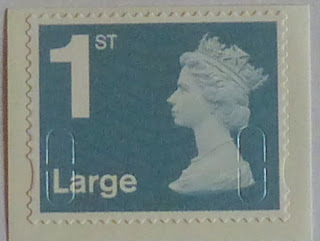 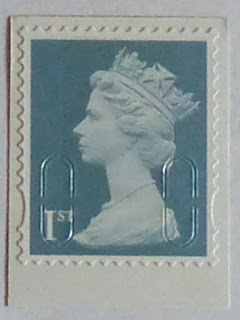 Another expensive addition - A 1st Diamond Jubilee "B with bright fluor and iridescence short at the bottom. £9.00. 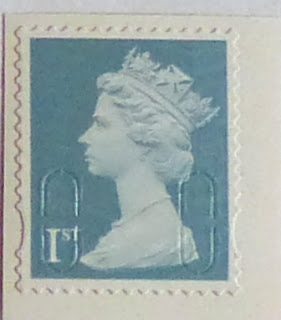 Another 1st Diamond Jubilee from the Classic Locomotives / Machin book of 6 with iridescence short at the top. £5.00 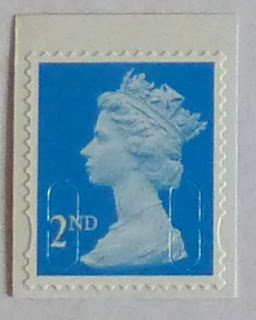 Posted by Andrew Hill at 4:17 pm No comments:

More familiar hues for these Signed For labels which I could have sworn we'd seen before. 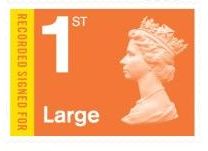 Oh yes. That's confusing! Wonder how long both will last?

These are due out tomorrow, 27 March, with the 88p value Regionals but it seems that there will be a delay in despatch to 11 April from Royal Mail.

I've had a Post and Go day, attempting to get some definitive list for this little lot. I thought it should be quite easy. After all, they only emerged in 2008; how hard can this be? Answer: jolly hard. I must have visited a dozen sites and trawled Ebay listings by people with odd user names when ABC Stamps might have been a little more likely to get my attention. B Alan's last two distributions included some clues but I need to know what he probably wrote in the last few years' notes which haven't yet reached the otherwise useful Connoisseur Catalogue.

Everyone seems to have lots of errors and misplaced phosphor bars but what I've been searching for is what would normal people have got out of machines and from the Bureau over the last few years? I can add the mistakes and the weird and the wonderful later.

All the dealers list things starting with the denomination: 1st, 1st Large, Europe etc and some have all kind of variations repeated over and over for each value. Now that does make some sense - and ties in with what we traditionally would look for and, indeed, is how I started in my own lists. However, I'm thinking of looking at all this differently and that might help.

Let's get the presentation packs out of the way first. They're dead easy (and as precious few will ever actually get used or see daylight after being filed away, not really of that much interest other than looking nice and showing us what the designs look like). There is just one for each of the Pictorial issues and, at the moment, just one original Machin one when Royal Mail caught up with themselves and issued one in March 2009 some five or six months after the October 2008 appearance in machines.

The pack stamps appear to be pretty much the same within each issue. There are some specialist varieties concerning short or inset bands and maybe some shades that some will want to look for but if we stuff all the packs in one list that's them done and dusted. It's also easy just to add to them as they appear in future.

Now, on to the real stamps - those that have been printed by machines in various places across the UK. As far as I can make out, all the backing is the same across each issue - it's already on the roll when it's put in the machine so within each issue, be it the Machin Head, Birds or whatever, what we're looking for are different types of printing of the denomination etc. If it's type X then it'll be type X for all five or six denominations. Serious definitive collectors will want each of the denominations available but most will not be too bothered whether the Worldwide n grams is printed on a pigeon or a tit. There's no need to list them separately - just say which values are (intended to be) available and we'll take either a strip containing each or may even be satisfied with separate items. The thing is - it's simply all or nothing so all the listing need say is Cows, 6 values, with the subordinate entries being the type of printing delivered.

Of course, there are two extreme groups: if all you want to collect are the pictures then you may as well just get the packs and buy one olive Machin and one blue Machin and you're done. At the other end of the scale are those who want every combination which, currently, means 36 items for Pond Life 1! I guess those guys will carry on regardless. This is for the middle group, like me.

I do appreciate that I run into difficulty straightaway with Birds I for which there are six designs but only five intended values! Let's solve that by having an extra 1st Class in the missing design. It doesn't really matter which value is duplicated. Apart from that, though, my listing works neatly and saves a lot of space and time for the Pictorials. I just have to discover which printing types were available for each - which I'll come to later.

For the Machin heads this works a treat too. The categories are just the four print types, for which there'll be a set number of different values available. Errors aside, that's nice and simple and shouldn't need extra spaces being inserted left right and centre or renumbering over and again. I shall separate the blue from the olive too and may have to fiddle around with the 40g here as I'm not totally sure of the change of printing and availability dates.

Yes, I know, what about where someone puts an old roll of Birds I into a machine next week? Well, we'll get a very rare (and expensive) printing to add to a specialist list. To be honest, I'd expect only to find these in complete sets or used as a dealer or collector spotting something like that emerging when they were expecting dragon flies wouldn't walk away with just one item! And those who didn't see anything odd will have posted and gone! Like the small problem of the later introduction of the Worldwide 40g rate, strange variations are out there and quite valid and collectable. But I feel they are in a separate group and shouldn't clutter the main list and forever stay an unticked box in collectors' sheets. The 40g has appeared where it shouldn't quite often and my inclination is to list those incidences separately - in a table which people can skip past without feeling they're not complete.

It has the same feeling to me as a 2nd Class print on an olive Machin or Pond Life, say. I don't know whether this is a technical possibility but I can imagine it happening. If it does then it could potentially mean an extra entry for every one of however many different designs there have been so far! 51, I think, of which just one is where it should be.

Talking of the technical, The Norvic people write brilliantly in their blog about which machines are operational and where but it's hard work going through all that to get the answers I need to a very simple question: what does each different print look like and when did they start producing items? From that it will be clear which issues will most likely appear and which are either highly unlikely to exist at all. We also need a nice clear set of images showing the different types all on one page. And the trouble I've had trying to figure out whether someone is selling one type or another. Sellers use different ways to describe machines or don't bother, assuming that we all just know. Now if I had one of those comparison displays it would be easy. If everyone talked about Types 1, 2, 3, 3a etc. then even better!

So, off I go now to update the lists my way. And once I have received the massive load of purchases I've had to make in attempt to get beyond the presentation packs and, at least, complete my list, I shall publish some nice clear guidance to the types as well that doesn't take an hour to decipher.

Posted by Andrew Hill at 9:56 pm No comments: 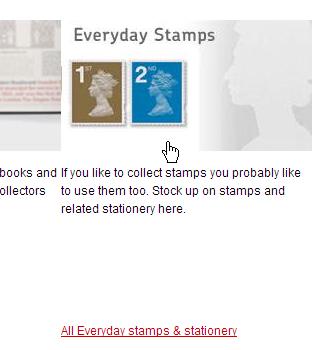 Posted by Andrew Hill at 6:26 pm No comments:

No peace for the poor Machin collector

Just as I thought was safe to go in.. the Freshwater Post an Gos, amongst other pieces arrive in another fat packet this morning!

Here are the latest additions: