1d red for the new prestige book but no Machin definitives

Just one tiny Machin definitive appears in the February British Philatelic Bulletin. And I mean tiny, being a mere 4mm x 5mm illustration of the 1st amethyst on the cover design of the previous month's voting leaflet.

February 2016 also sees the issue of the Royal Mail 500 Prestige book which also features no Machin definitives but the 17th Penny Black anniversary stamps instead. These will be the 1st in 1d Black, 2d blue and 1d red designs. The 1d red is a new arrival, similar in design to the existing two. These are nice stamps and, appearing also in a book of 6, we may even see a few of the red ones on mail. Having said that, I saw none of the black or blue ones when they came along last year. 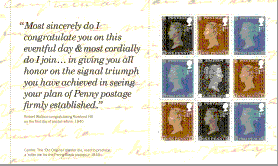 As for Machin definitives, I can only guess that we'll see some rate change issues in April or that there will be another prestige pane before too much longer.