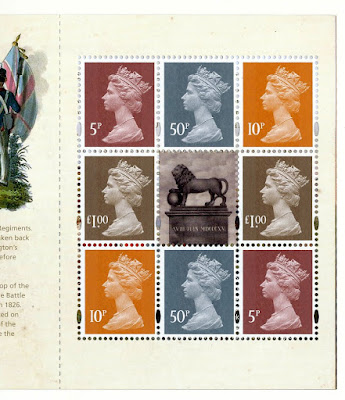 Another bleak prestige book of war came out today. This one is all about the Battle of Waterloo which is not the crowds at a London station but a place in what used to be called the United Kingdom of the Netherlands and is now in Belgium.

I have never understood quite why it is remembered and talked about so often now but blame Abba in the main.

Anyway, it represented an excuse for another expensive little book of stamps with ten special issues from the two sets being issued for this event as well as the part that we're really interested in, the decimal pane.

In the now traditional format of 3 x 3 there are eight Machins around some label. The labels I tend to regard as something of an also-ran in these things but I would draw your attention to this one being printed with a background that goes right up to the perforations, so would appear without a white border if it were ever to be seen on its own. Bearing in mind just how precise the alignment has to be to achieve that, I can't quite see the point but there you go. From some viewpoints, it looks as if the eight stamps border an empty space through which we just happen to catch sight of part of Trafalgar Square.

The new Machins are nice, sensible values: 5p in ash pink, 10p tan, 50p slate and £1 wood brown. Two of each. Although you know and I know that there's little chance of any of these being used on anything like normal postal items, at least we don't have to add a fifth 97p or another £1.52 to our lists. there are so many varieties of the main values that an extra one each doesn't matter a great deal.

They all have the M15L MPIL security code and two phosphor bars, printed on gummed paper by, presumably Cartor, if that is who 'International Security Printers' implies rather than some random international security printer.

This is £14.47 which you will spend, put away somewhere and probably forget about for another 200 years.