No 12 across or definitives in the Philatelic Bulletin 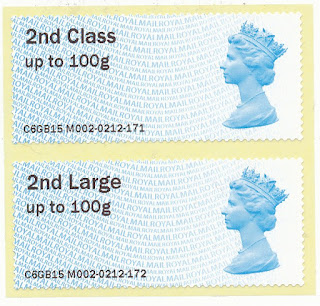 This looks like a new font for the two 2nd Class Post And Gos, which I'll call IVA for now as it is pretty similar to the type IV with the bold smaller text for the code being the most noticeable. It is interesting to note how the text is getting ever smaller and the old style type 1 looks terribly out of place now. Odd that these are on an old backing but I am advised that these come from 'Enquiry Office' machines which had an office name line before but that's now removed. Not that I'm much the wiser. 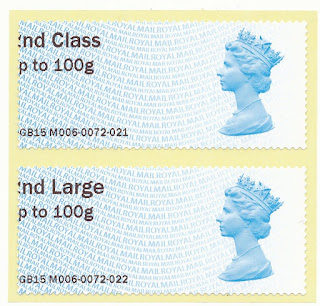 From the same source, here is an error where the print has overlapped the edge but not, apparently gone on the backing paper or maybe it just rubbed off the shiny surface there. 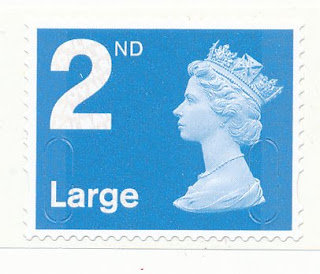 Another '15' date code, this time for the 2nd Large stamp by Walsall and bearing MA15. Quite why they insist on that structure when everyone does M15L on other issues is odd but I shall not worry about that too much.

What is, perhaps, more worrying is the lack of any Machins in the July 2015 edition of the Philatelic Bulletin. Apart from two booklet illustrations where a block of four 1st Class Machins are shown with two Special issues in the familiar booklet format, and they're only shown as illustrations of the special issues, there are not even any illustrations of Machins. That, I think, is a first. The issue is almost entirely taken up with war items which, whilst appreciating their importance at this time, I do feel is being slightly overdone now as we will no doubt soon be getting previews of the November Remembrance stamps as well.

As well as no Machins, there were also no Post And Gos incidentally. Not a good issue for definitive fans.

The crossword also lacked a clue for 12 across. I don't usually do the competitions but this week, for some reason I cannot really figure, I completed both the stamp identification and worked out the answer to what was being spelled out by various squares in the crossword solution. The missing word was C_A_G_ which could have been CRAGGY or CLANGS but I decided it was more likely to be CHARGE or CHANGE and opted for the former, adding my own clue 'None for entry' designed to match the fact that there was no clue to there being no charge for entry to the competition. It was a bit forced but did produce a response from a nice lady at the Bulletin to complement me on completing it. Apparently the clue should have related to a solution CHANGE so I had guessed the wrong one but still feel a little hopeful that my first entry in probably 40 years may get me something. More news on that later. Prizes really are very modest.