Long To Reign Over Us

A book of six stamps with the phrase in the title as an iridescent print in the background and the code O15R. The code does seem a little pointless, being the same as on the miniature sheet stamp below but never mind.

There is also a miniature sheet comprising three 1st Class and two £1.52 stamps, none of which I suspect we will find on our post! With four emblem stamps illustrating the changes over the years there is a gummed Machin which, whilst also printed in gravure as the booklet stamps, looks distinctly furry to me at its left edge.

This stamp is supposed to be the same size as the booklet ones and it may just be an optical illusion but the rectangle part looks smaller, with a wider border between it and the perforations. 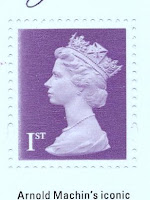 These will be around for a while I imagine as standard stock for books of 6. There may also be some other examples appearing in time but, as of today, these are the only two examples and there has not been a sheet definitive issued nor a book of 12.

The Philatelic Bulletin has these as printed by ISP, good old International Security Printers. I am assuming that is Walsall fro the booklet but i really wouldn't like to say who did the sheet. It's not that brilliant.