Here's what you need to know about 2011 in the GB Machin definitive world. Again, acknowledgements to Robin Harris for all these illustrations and dates.

The year started off with a bumper bundle of rather tedious stuff in the shape of strange codes now on 1st, 1st large and 2nd NVIs, marginally relieved by an interesting red and yellow affair for packets the postman actually manages to find someone in to sign for. The two items there too, though, look like yet more we'll need to purchase at least yearly where I am sure we would have bought one of each and that would have been it for a decade. Like Postage Dues. Whatever happened to Postage Dues? 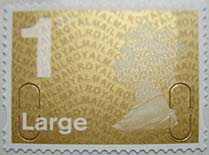 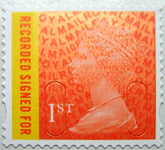 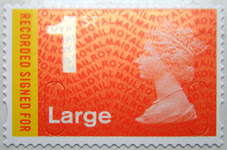 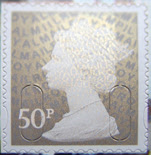 1st Machin birth centenary miniature sheet. Security code M+11. This I find very disappointing. Even the actual sheet, with its shine and more visible 'gold', just doesn't seem to do justice to the chap. There have been some superb issues that could have been raked out again for this occasion - notably the large format £1 affairs (but not the scratchy black one) or just the simple but so effective 1st in black which could have been resurrected from 1989. 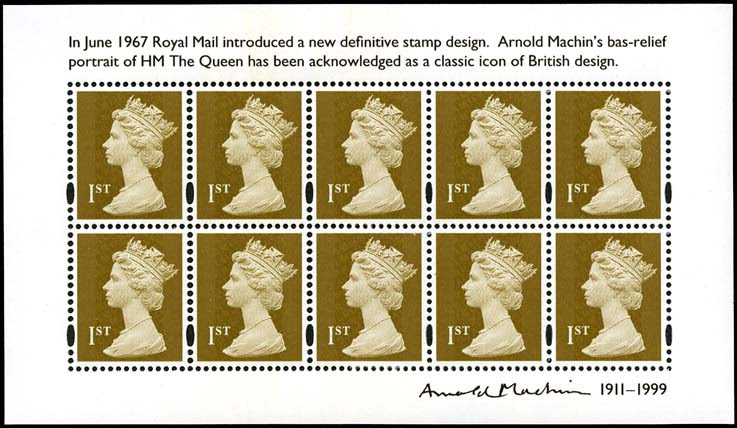 Quite a bit going on with the Post and Gos. In March 2011 a new type of dispensing machine, a HytechPV or something like that, appears to have been installed in some locations and looks like being rolled out elsewhere too in due course. This produced a different font for the main rate lettering as well as clearly different numbers and letters too. So that's at least one more set of 5 rates you'll need.

Then, in September 2011, they decided to add an overprint (well an extra line or two of print would be more precise) to labels (not the Birdy ones, just, apparently, the Machin head and Flag and maybe a Christmas picture one) so that's another set of 5, and probably, now I think of it, one set for each type of printing device.

You see, one of the problems (and part of the fun in a way) of Post and Gos is that you can never be too sure quite which location has which machine and whether its working or what someone has put in by way of rolls. I have read the Norvic blog and others and there are even forums now where people tell each other what's happening at each location! One guy even trotted around London to get labels from as as many machines as he could and did weird things like note how many each machine had sold since the previous visits. You have to admire that sort of dedication. You also have to wonder whether there isn't someone with a detailed record of all this at Royal Mail somewhere whose job it is to know what's happening where. I'd just call him up.

Lastly, in October 2011 someone decided that 20g wasn't enough for the Worldwide customers and tweaked some machines to produce 40g versions as well. Yes, depending upon when they actually tweak machines and whether they're old or new ones that means yet more sets, doesn't it. And more Machin 'over'prints too. Now I'm getting confused and clearly will have to lie down and sleep before redoing the lists I spend hours putting together.